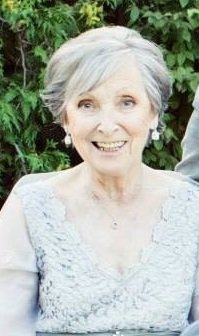 Stillness comes to the heart of our family, Adriana “Joan” (Boersen) Oud lovingly gave every ounce of her strength to the ones she loved. Joan, our mother, our Woogie, knew one way to love: give of yourself. Though she passed away Saturday, December 29th, 2018 at South Huron Hospital, Exeter, after nearly 80 years of vibrant life, her strength lives on in the lives of all she touched.

Born as World War II erupted around her family farm in Stoutenburg, Netherlands, Joan observed how family came first. She recalled the night all 12 children, her parents, and hired help slept in one room during a bombing raid, because as, her father, Ysbrand Boersen said, “If we go, we go together.”

Echoes of that family value brought them to Canada during the wave of Dutch immigration in the 1950s. Two years later, her father’s sudden and unexpected death meant 14 year-old- Joan had to forgo her dreams of education to spare their mother entering the work force of a new land.

With pluck, she cleaned houses, sewed at a shirt factory and assisted at a dental office. That left her time to go to carpool with her siblings to weekly Dutch dances and save her pennies so she and her sister, Alieda, could take their mother to the home country and throughout Europe.

At 16, Mom’s good dancing and “Sophia-Loren” looks at the Dutch dances brought her to the attention of her first boyfriend, fellow, Dutch immigrant, Peter Gerard Oud. She broke his heart and could not be forgotten so they reunited 12 years later for a Valentine Day wedding. Their marriage lasted more than 40 years, until Peter’s dying days where Joan tended his every care and need.

Joan’s greatest joy came as a mother. Nothing delighted her more than snow days where Carla-Ann, Jason, Dwayne, Stephen and Andrew could be together. Joan, the first girl in her family after a gaggle of 7 boys,  knew how to handle a gaggle of boys – and a girl – with the wry wit, direct observations and heart-felt communication.

Joan finally got more daughters as her sons married kind-hearted women: Janna McFadden, Sarah Breen and Teresa Roelands. And Joan delighted in teasing her daughter’s Naval husband, Peter. From that love came, the grandchildren whom she called her blessings: Tristan; Addie and Sawyer; Karlie; and Ava and Connor.

In her 50s, when the family hit hard times, she bravely struck out in the workforce. Her nurturing nature at St. Francis Advocates, helping those with Autism and developmental challenges, won her friend amongst much younger co-workers.

Behind the strength, there was always compassion for others which would bring her tears, and more importantly, action. It’s why she made her mission: to care for everyone.

Resting at the T. Harry Hoffman & Sons Funeral Home Dashwood with visitation Thursday, January 3rd, 2019 from 2 to 4 p.m. and 7 to 9 p.m. Family and parish prayers at 3:45 p.m. The Funeral Mass will be celebrated at Immaculate Heart of Mary Roman Catholic Church, Grand Bend, on Friday, January 4th, 2019 at 11 a.m., the Rev. Tony Laforet, celebrant. Interment Pinery Cemetery, Grand Bend. Luncheon to follow at parish hall. To  remember Joan, follow her lead, follow your heart to an act of kindness.