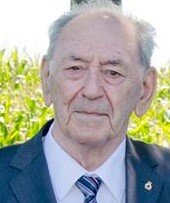 MILLER:  Peacefully, at Alexandra Marine and General Hospital, Goderich, on Monday, February 21, 2022, Daniel “Dan” Miller recently of Goderich, formerly of Grand Bend and London, age 92.  Beloved husband of 66 years to Sheena (Ridley) Miller.  Loved father and father-in-law of Sheona and Garry Baker of Grand Bend and Doug and Faye Kellie of Victoria, BC. Cherished Papa of Jeffrey and Kelsey Baker of Shipka and B-Pa of Andie and Kensie. Dan was one of eleven, he is survived by Robert and Isobel and is predeceased by Bill, Alice, Bruce, Anne, Hugh, Elizabeth, Irene and Jean (infant).  Remembered by his special nephew David Aitken and his family, as well as his other nieces, nephews and their families.  Predeceased by his parents William and Annie (Docherty) Miller and many siblings-in-law.  At Dan’s request, cremation has taken place and a Celebration of his life will be held at a later date, time and location to be announced.  Dan was a long time employee of Kelloggs in London.  Arrangements entrusted to the T. Harry Hoffman & Sons Funeral Home, Dashwood. If desired, memorial donations (payable directly) to a charity of your choice would be appreciated by the family.