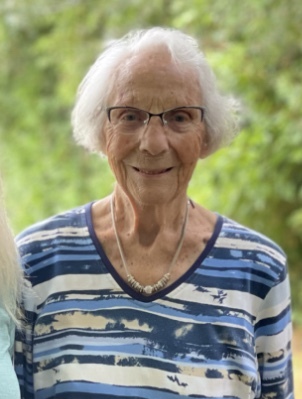 EAGLESON: Peacefully, at South Huron Hospital, Exeter, on Sunday, October 30, 2022, Joan Phyllis (Ritchie) Eagleson of Grand Bend, age 90. Beloved wife and best friend of the late Jack Franklin Eagleson (2016). Loved mother and mother-in-law of Mike Eagleson and his partner Patti Cowan of Grand Bend, Julia Webster and her husband Phil of London. Loved grandma of Anthony “Tony” and Nicole Eagleson of Hausen am Albis, Switzerland, Carolyn Eagleson and her fiancé Dan Berriman of London, Jimi and Ashley Webster of London and Melanie Burch and family of London.  Cherished great-grandma of Catherine, Jordan, Carter and Caden.  Dear sister and sister-in-law of Eleanor Ritchie of Sarnia, Sonia and Wayne Greb of Centralia, Mary Lou and Doug Dixon of Centralia and Bill and Barb Mercer of St Thomas. Remembered by her nieces, nephews and their families. Predeceased by her siblings and in-laws Clifford (2020) and Velma Ritchie (2006), Kathryn (Broderick) Mercer (1994), J. Clare Ritchie (2017), Sandra (2018) and Dave Green (2005), Gerald “Jerry” (2002) and Leona Eagleson (2021), and parents William John (1977) and Viola Ellen (Allen) Ritchie (2008). Resting at T. Harry Hoffman & Sons Funeral Home, Dashwood, with visitation on Wednesday, November 2, 2022 from 5 to 8 p.m. and where the funeral service will be held on Thursday, November 3, 2022, at 11 am.  The Rev. Gail Fricker officiating.  Interment Pinery Cemetery, Grand Bend. Joan was a teacher for many years, beginning her career in the Dashwood School, then moving to Grand Bend and later supplying for many of the schools in the surrounding area.  Joan and Jack spent many winters in Florida and the Southern States and travelling around North America in their motor home; they were able to travel to both coasts in Canada and many of the states in the United States.  If desired, memorial donations (payable directly) to the Huron Shores United Church, Grand Bend; the Alzheimer’s Society or the Canadian Cancer Society would be appreciated.

For those that were unable to attend the Funeral Service, it was recorded and can be viewed by clicking this link https://youtu.be/rurZ4eIDLqk