History of the Founder 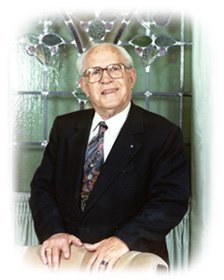 T. Harry Hoffman's career in funeral service began in 1926 when he started working with Peter McIsaac the undertaker in Dashwood. He received his Ontario Embalmer's License in 1934, and purchased the business upon the death of Mr. McIsaac in 1940. Seeing the need Harry built the first residential funeral home in Dashwood in 1941. Harry prided himself in creating a reputation of giving dignity to burial. His caring and compassion, to families during their time of loss, as well as his love for his career, were well recognized by the local community and surrounding area. . Today those same traditions and values are carried on by his son Jim, who like his father pursued a career in the funeral industry becoming a licensed funeral director in 1971.

Manager of the Dashwood Telephone exchange

At the age of 14, Harry Hoffman was an operator at the Dashwood telephone exchange, Hay Municipal Telephone Company, which was owned by Peter McIsaac. When McIsaac died in 1939, Harry became manager of the phone system. He supervised the construction of the new telephone exchange building in 1942 at the same time he was building his new funeral home. During the war, Harry use to make telephones, which were hard to get at the time. He would scrounge working parts from old phones to assemble working phones. In many cases he would have to make the wooden cases the phone parts where assembled in. His involvement with the telephone company created his interest in collecting telephones. His collection consists of over 100 telephones, with models dating back to 1880. Located in the basement of the Funeral Home, Harry's "Telephone Room" is filled with telephones and other telephone related memorabilia Proud of his collection, he often took families coming through the funeral home, on a tour of his room. The collection is still enjoyed today by many, at the funeral home.
Caring on the tradition of working with the local telephone company, Harry's youngest son Jim is director of Hay Cooperative Communications, since 1995. 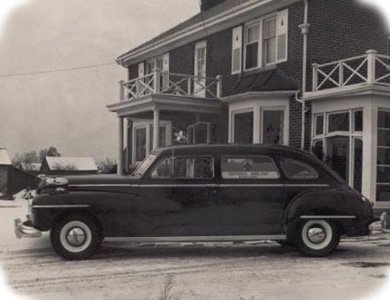 In 1939 Harry Hoffman initiated a privately owned and financed ambulance service to Dashwood and Grand Bend. The first ambulance initially equipped with only oxygen, was a two door Hudson, and was housed at the funeral home. Harry and his wife Maud, operated the service, along with the help of hired employees..The service was expanded in 1965 to include Exeter, Centralia and surrounding areas.

Music was an ever present love for Harry Hoffman. Being a talented baritone soloist, he won the gold medal four consecutive years at the Stratford music festival. Active in many musical circles, he also received a number of medals and scholarships at festivals in Toronto. It was these achievements that won him the attention of the late Sir Ernest MacMillan, the choir director who was to lead the Commonwealth choir. He was chosen to take part in the Coronation in Westminster Abbey, London, England of the late King George V1 and Queen Elizabeth, a choir of over 400 voices, in 1937. He later sang at a local memorial service when the King died in 1952. Harry had the honor of meeting personally with the Queen Mother during her trip to Canada in 1989, as he was one of the few surviving members of the Commonwealth choir.
He was active in the Seaforth Harmony Kings, and was an active member in the now disbanded Huronia Male Choir. For 70 years he sang in the Calvary United Church Choir. As Bandmaster of the Dashwood-Seaforth Band, he lead them at local events up until his passing at the age of 91.